On this page I will document the process of creating a GUI for the HUG made by Xiomara. I ordered a bunch of hardware to get started, always a joy when new nerdy hardware arrives! 🙂 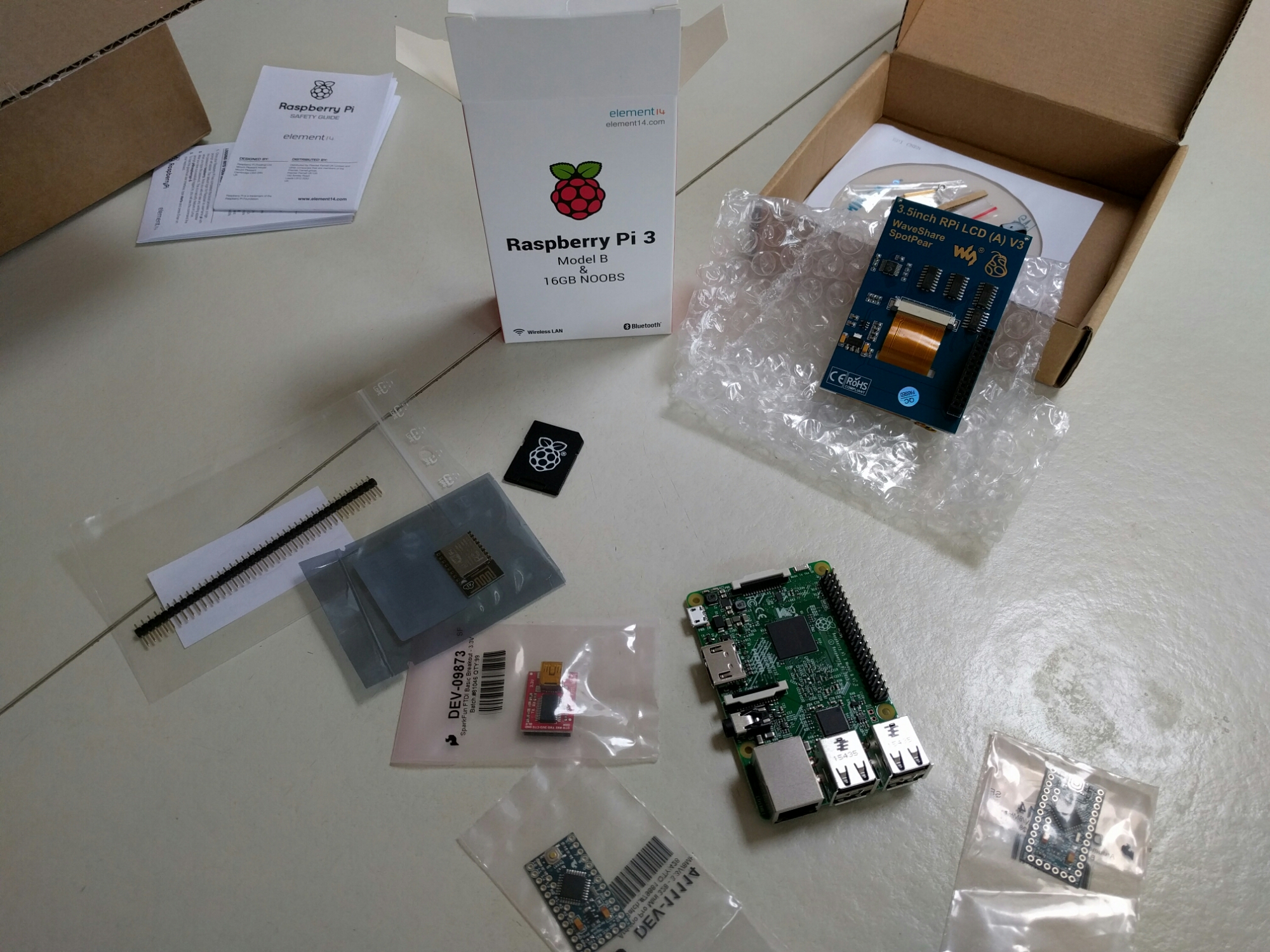 I ordered a Raspberry Pi with a LCD touchscreen (and some spare Arduino’s and ESP8266s ) to get started. After some software juggling I was happy to have the LCD up and running. 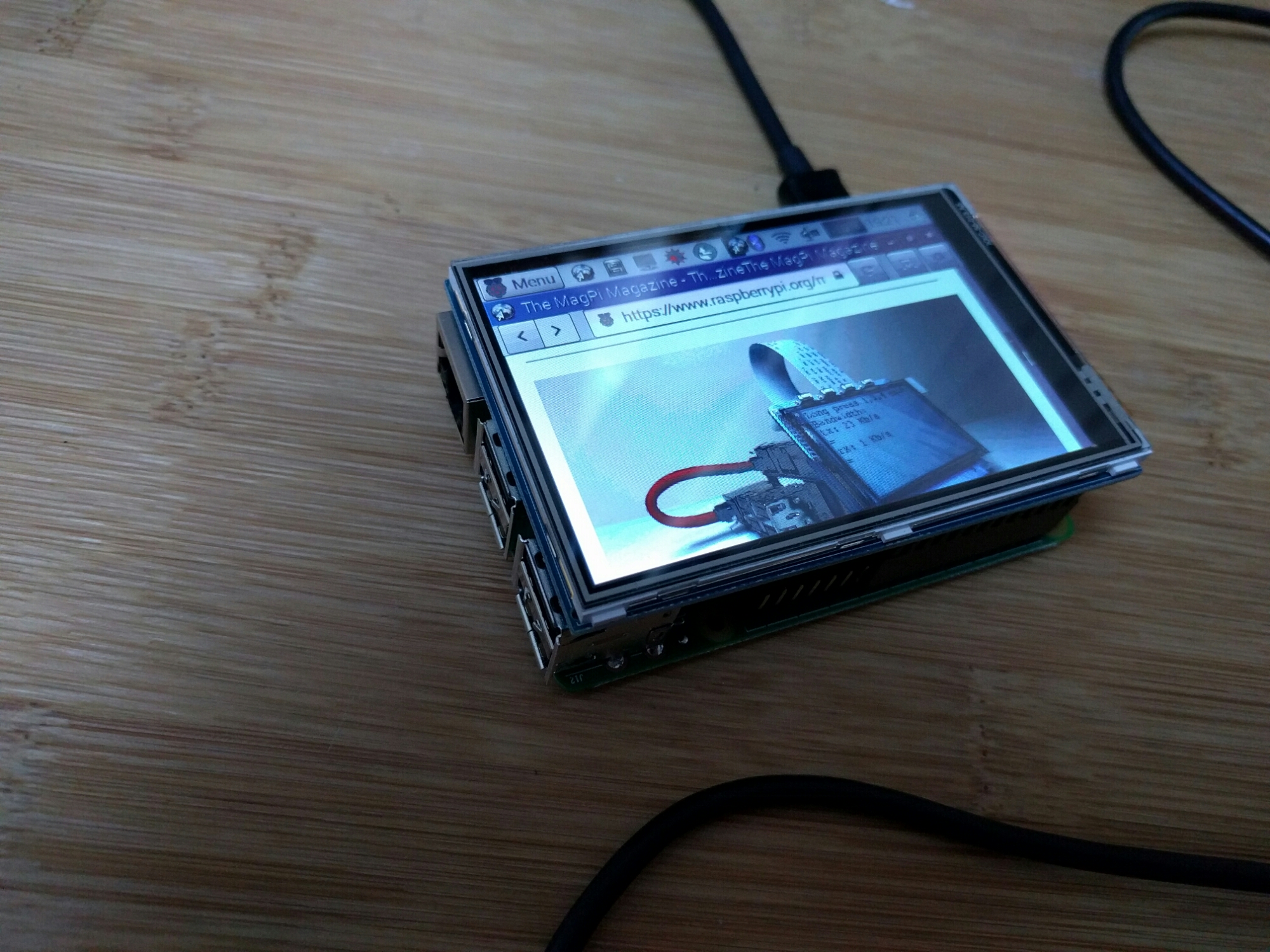 Next step is my first attempt in showing a fullscreen example based on an example from [educ8s]. This means I can now start on the actual interface front and back-end. 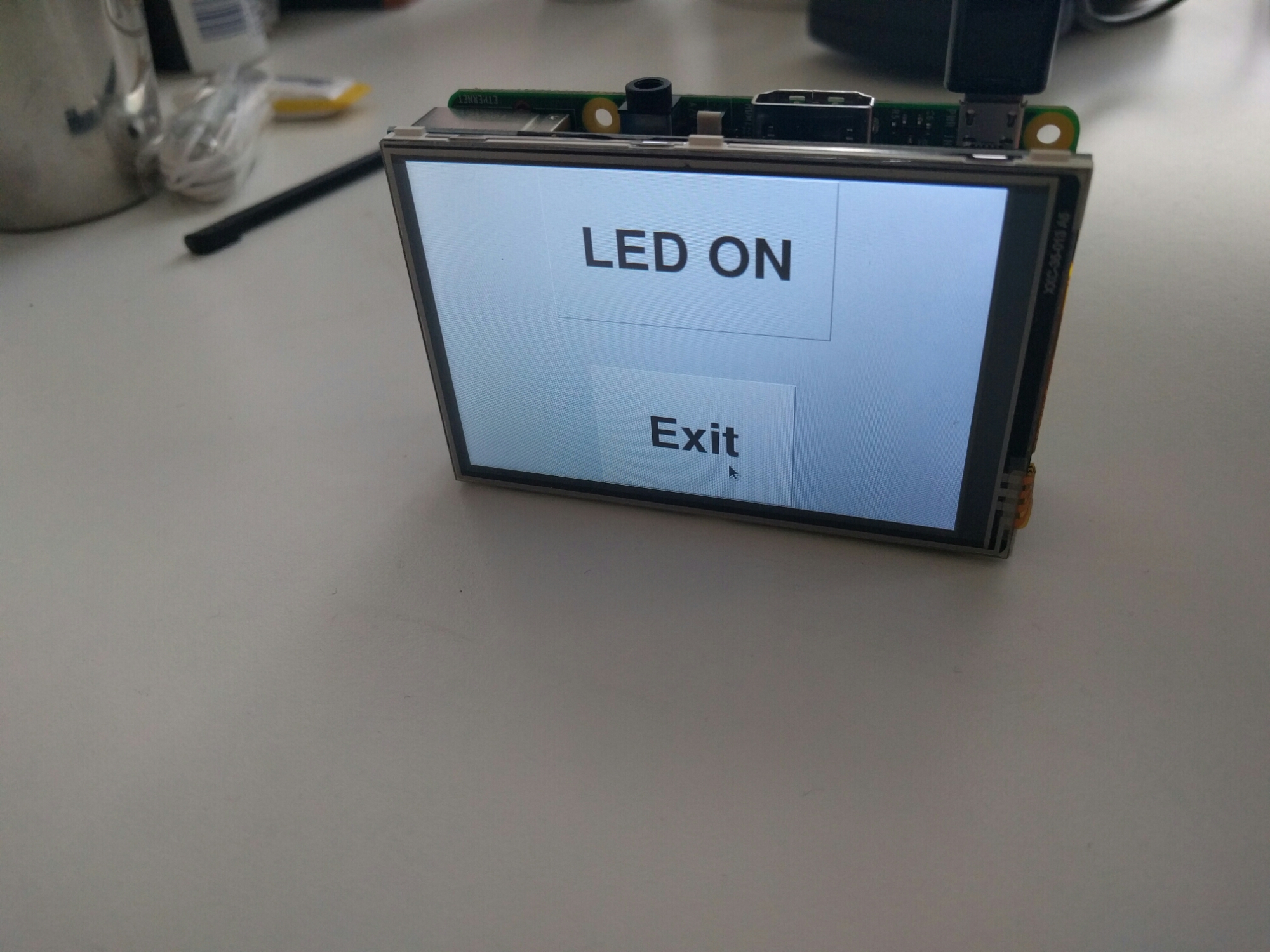 Before I start figuring out how to make kick-ass graphics appear on the screen I will start writing some code that allows me to interface with the available timers for the HUG and see how I can control them through some simple buttons and sliders. Which makes me think I need to figure out how to code a slider that outputs values between 0 and 254 for example. Let’s take a look…

Don’t you love google? I found that the python tkinter package has a neat little Scale widget that does exactly what I need! 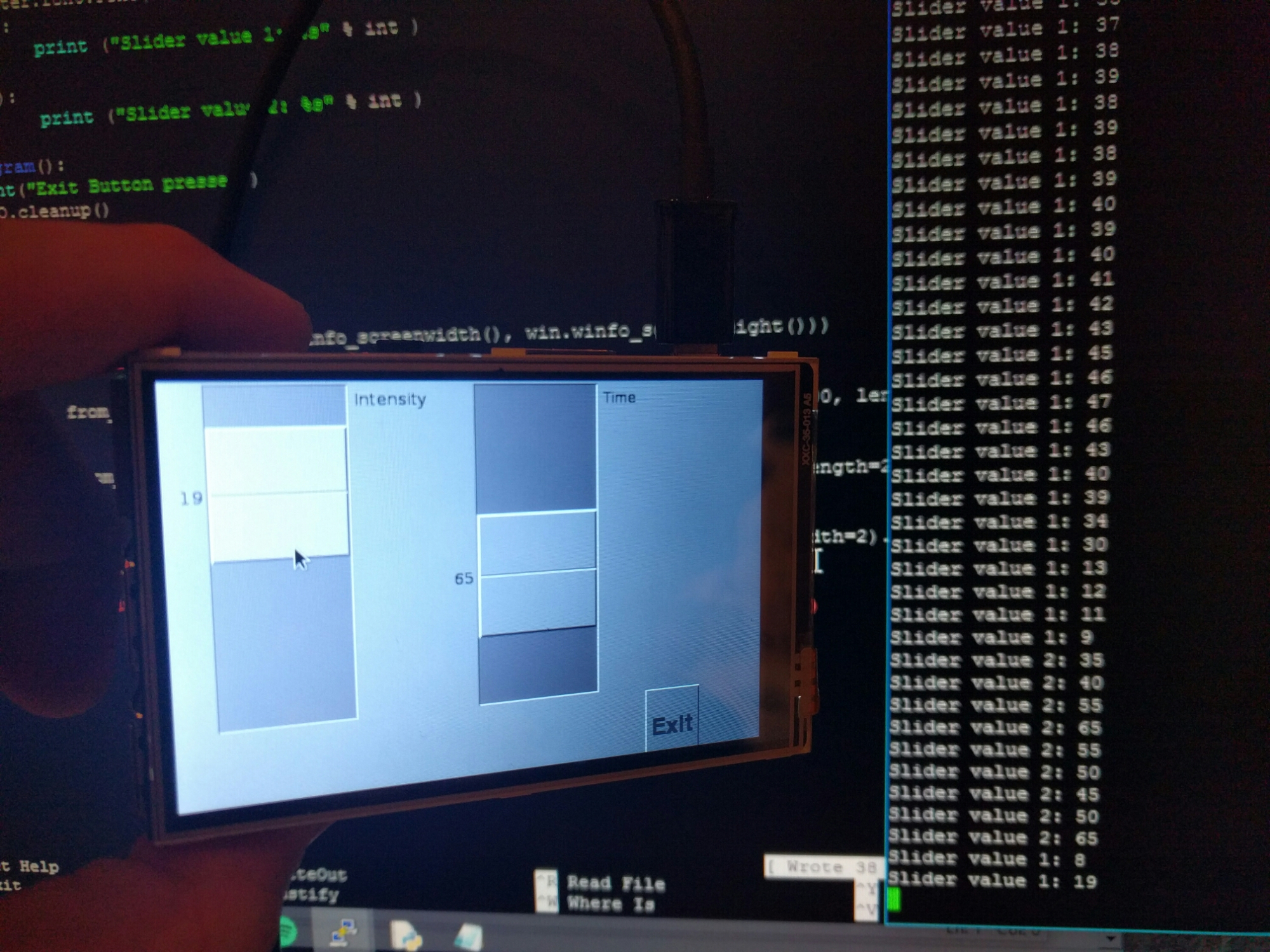 Now let’s wait on those timers to see how to interface with them.

Meanwhile I have attached a USB serial to TTL adapter so I can transmit the values of the sliders to external devices. In this case I used a Arduino Pro Mini with a MicroView OLED attached to display the values. 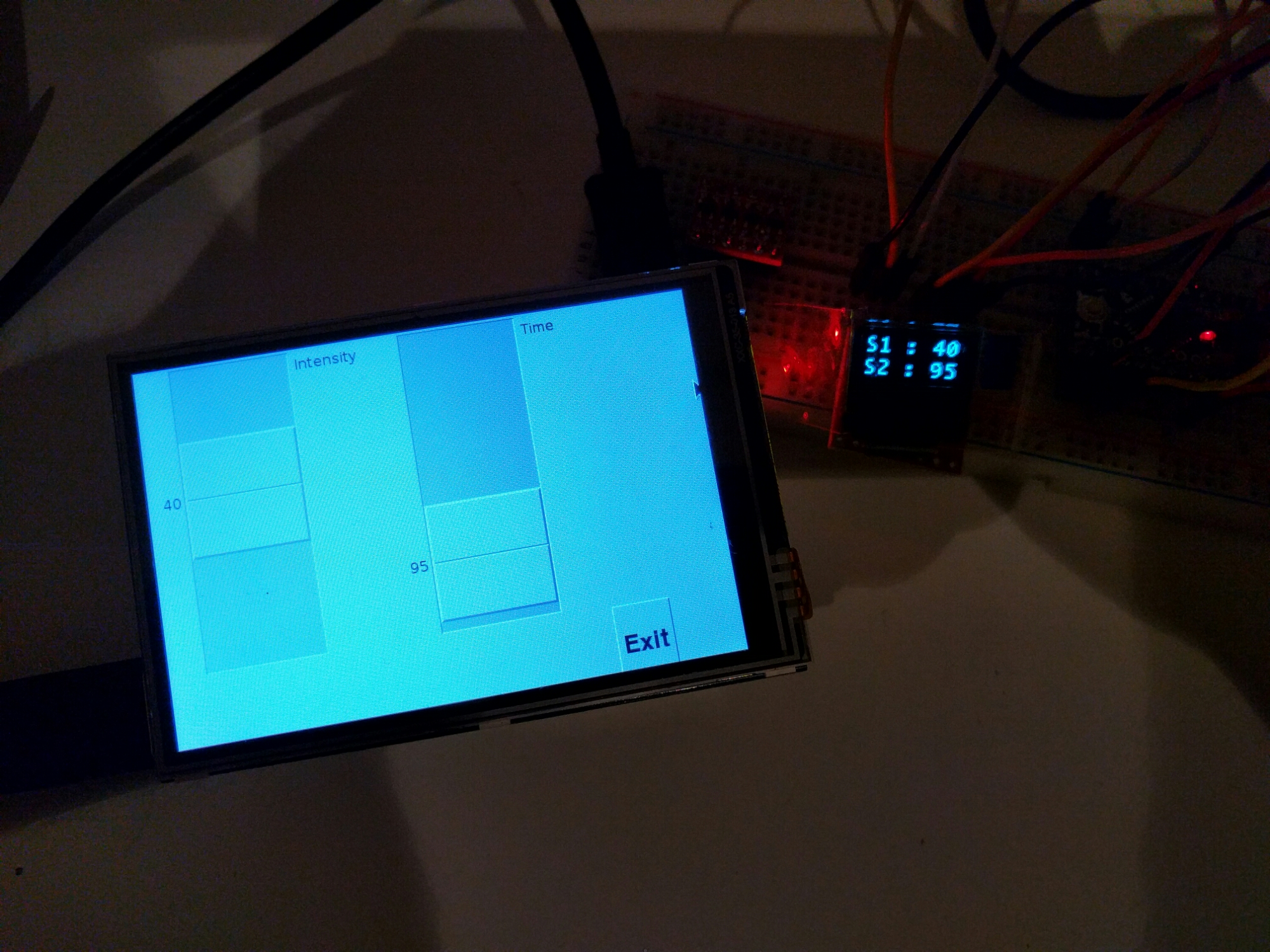 I don’t know what format the timers expect the data to be in, but the current setup will be a good vantage point.

Last week I received the box of timers and other switching & control electronics from Xiomara to sort through. I will describe each component based on what is written in the manuals (if present) and based on what I find out by means of testing.

After some quick tests I have been able to distinguish the components as follows (click on the component name to jump to the detailed test description):

After some quick tests with all the components I have the following remarks for each component:

All things considered I believe that the Bluetooth control box is a unit to continue with. It is both simple and versatile. The bluetooth functionality combined with the ability to continuously adjust the power provides the option to control an IR lamp with both an app and with an interface that can communicate using Bluetooth.

If I want to control the Bluetooth control box using a custom built app or via another bluetooth device I need to find out what communication protocol is used. I believe I can obtain this information using two methods:

This seems to be more difficult than I initially thought. The logs of the bluetooth commands are hard to interpret and the decompiled APK has been decompiled so hard that it became unreadable. In parallel I tried to connect my BLE enabled Raspberry Pi 3 to the Bluetooth control unit, but I have not (yet) succeeded in talking to it. At this moment I am seriously doubting if I will be able to have a custom program talk to this unit via Bluetooth. It might be easier to buy or create a variable power circuit that can be controlled externally, so I can control it via the Raspberry Pi.

I’ve decided that the bluetooth track is a very hard and unpleasant one to follow. So now I am focussing on interfacing with the custom built timer. It seems that this timer is able to variably control power as well, so this might be a good choice after all. I will start with sniffing the TTL serial connection and the I2C bus to learn how the touch interface communicates with the timer board. It seems that

Each 840ms a burst of data is send from the controller to the interface.

When the timer and power settings are configured on the interface, a configuration message is send to the timer. When the message is correctly received, the timer transmits an acknowledgement message. If not, the timer sends an error message. I have not checked this, but it might be the interface tries to send the same message again for a limited number of times after this.

When the program is stared, the interface sends a start message.

When the power settings are changed while a program is running, a special power change message is transmitted by the interface.

While a program is running, the timer transmits a status update every second, containing at least the time left and possibly also the power settings.

When the program is finished a special status message is transmitted by the timer.

When the program is stopped or paused via the interface, a stop message is transmitted that will switch of the power to the outputs while the settings are preserved.

Now I will be able to create my own messages using the Raspberry pi and use the touchscreen to control the timer.

Picture below show how I compared signals from the timer and from the Softwareserial of the Arduino. Last two pictures shows a second draft of an interface on the Raspberry Pi touchscreen to control the timer and read the status messages. 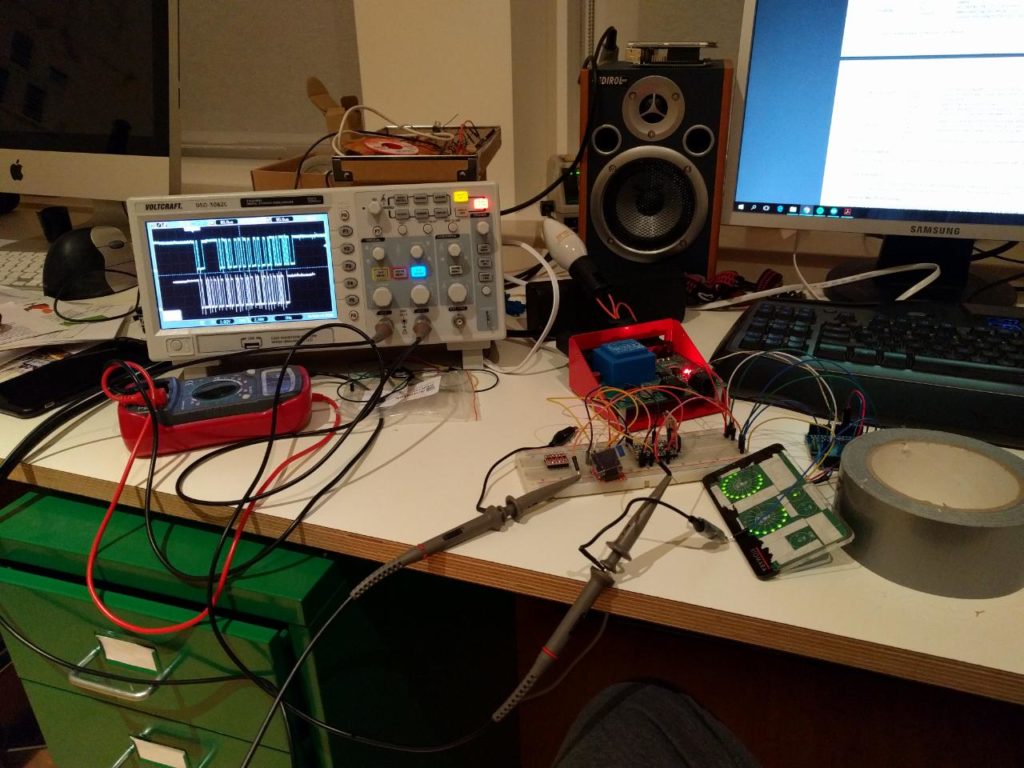 Based on what I know how someone will use the HUG, I came up with the following requirements for the user interface:

A translation of these requirements to an interface:

Main screen with a button to start a standard session. On the main screen you will see the length of the session and the power setting. If it is a valuable feature to change the power throughout a setting, a small graph can be drawn to indicate the changing power over time.

The name of a preset could be something like: Quick recharge, Deep relaxation, Slow sedation, etc.

When a preset is selected, another screen appears that contains the details of the session, a start button and an edit button. When the start button is pressed, the same screen shows, and the total time of the session is now a countdown timer. In the graph that shows the power against the time, a vertical bar gradually moves to the right to indicate the progress of the session and the power setting of the front and the back heater.

On the main page is also a button to create a new session type and a button to shutdown the interface (and the HUG as well).

When the user defines a new session preset, he slides his finger across a bar on the display to set the duration of the session. The duration can be fine-tuned using a increase and decrease button with a 1-minute resolution.
Then the user can select the power settings of the front and back heater. If one setting is entered, that setting will be maintained throughout the session. It is also possible to vary the power setting throughout the session. To achieve this, a second power setting is entered. This will automatically insert a transition bar for which the duration of the transition can be altered. For example: the user entered an initial power setting of 80% for both heaters. For the second setting he wants the heaters to increase to 100%. The transition bar can be used to define if the transition between these two settings takes 10 seconds or 1 minute. Another bar needs to appear which is used to define when the second setting needs to be initiated. If the length of a session is set to 20 minutes, then the initiation of the second setting (the end of the transition period) can be configured at 10 minutes. When the transition period is set to 5 minutes, then the power to the heaters will start transitioning from 80% to 100% 5 minutes after the session is started and completes 10 minutes after the session start. The power to the heaters will remain at 100% for 10 minutes until the session ends at 20 minutes.